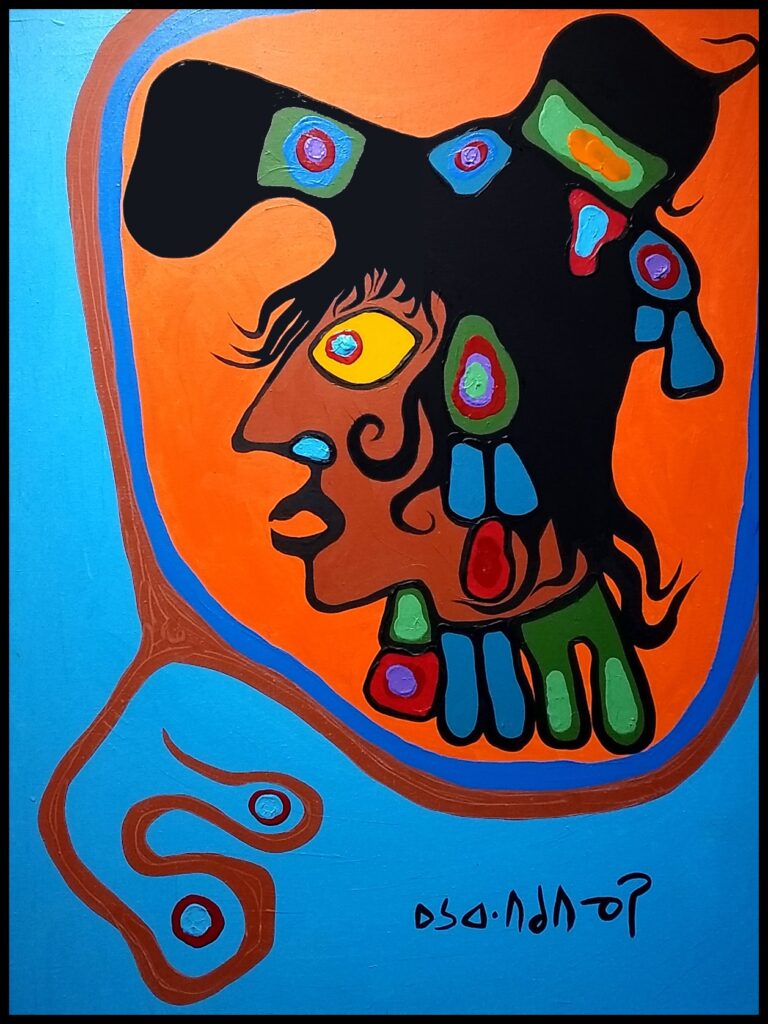 “Whatever happens the spiritual things are what I want to put into the paintings for my people. To them, I want to teach and explain Eckankar, for it is known among our people that the beloved soul follows the inward path of the spirit. Eckankar is the origin, the mainstream. It is the Eck who we as natives choose to call the spirit within us, the Holy Ghost of the outward teachings of Christ. We as Eckists follow the inner master and his teachings.” – Norval Morrisseau, 1978

In 1979 when I began my apprenticeship with Morrisseau he gave me four ceramic beads. Two were light blue and two were a darker blue. He shared with me that when he was young he woke up in a dream where he was given similar beads by his grandfather who told him that were meant to protect him during the day and during the night. – So I wore them each day and night for months.

The liberal use of blues and unusual subject matter explored in Shaman’s Speech may be a result of the influence of Eckankar during this period in his life. Eckankar teaches mastery of the ancient mystic science of vibration, light and sound. Shaman’s Speech is a self portrait of Norval, as both student and teacher. It is a painting of his spiritual mind in the process of mastering the tools of thought and speech.

The thought that whatever happens above also happens below, compels the shaman to speak. His words are spells that release him from psychical limitations and aberrations of the mind. In his master of speech he moves beyond duality and enters into a higher unity on the inner planes of spirit. Shaman’s Speech is a self-portrait of the peacemaker and visionary artist in action.