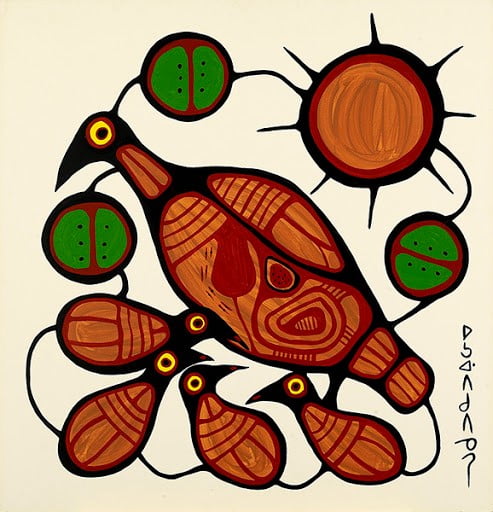 “Once I lived out in the country where I had to walk two miles to get to a telephone. So I was walking along feeling sorry for poor old Norval and I passed a turkey farm. There must have been over 3,000 turkeys on either side of the road kept back by fences. As I walked by, I began to be aware of the sound of one turkey after another. As I walked and they conversed I thought of St. Francis and wondered if he really talked to the animals or was it the vibrations from this magnetic force within us.

The more I thought of that the more I forgot about anything else. I just had a chat that made me more aware that we are just a molecule within a molecule in the body of God. That allowed me to forget my own radiance and that’s what I’m talking about. The thoughts just stop coming into your consciousness. That’s what I mean about my painting coming from somewhere else. I’m just as simple as anyone else – and maybe more so and there isn’t anything that I can’t do. Wherever your imagination goes your mind is sure to follow.” – Norval Morrisseau, NOW Magazine 1984

One autumn I watched Norval climb on to a country fence and deliver a lengthy speech to thousands of turkeys. When he began to speak the turkeys were far off behind a hill in the distance. You couldn’t see them except for a few heads bobbing here and there. With an exhilarating haste the hoard rounded and descended the hill at breakneck speed to greet Copper Thunderbird. I was shocked. Norval laughed. The turkeys all seemed very interested in what he had to say so he gave it his best shot. His speech included a rousing climax and an epiphany.

Days after Norval still felt euphoric about the turkey episode. They had responded to him with real attention and he appreciated it immensely. Why? Well he knew where they would soon be going and he felt that he had assisted in providing them safe passage to the great beyond. He told them not to be afraid. That they had done well. That they were beautiful and strong. That they were all great souls. That people would be better because of their gift. He told them that they were special turkeys and he knew that they were because he was there speaking to them. He put his great big heart around them and blessed each of them. And he kept blessing them through the Thanksgiving holidays.

Years later he would mention them as if to say, “Those were the good old days…the days when I talked to the turkeys.” By sharing his sweet memory of that moment he continued to bless their short existence over and over again.”