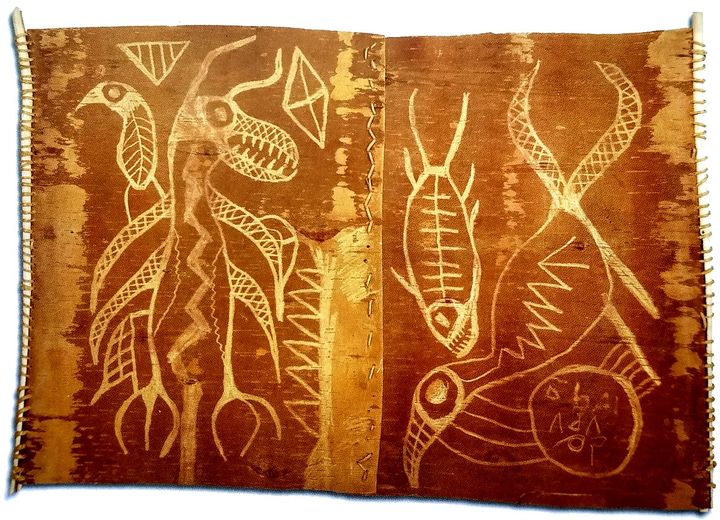 “My teachers? Who could teach me this? Only Legends.”

“The first stop was Port Arthur, where I met a wonderful lady named Susan Ross, a graduate of the Ontario College of Art, married to a judge, James Ross. She used to go live on reserves and do portraits and drawings of Indian life. She kept telling me about this Indian who painted on birch bark … Susan Ross had come to Beardmore for some extra classes with me and her friend Sheila Burnford, who wrote The Incredible Journey, which Disney made into a film, had come along for the fun. They drove me to Norval’s house the next day.” – Jack Pollock, writing about “discovering” Morrisseau in 1962

When creating imagery on birchbark Morrisseau would study the bark itself for hidden imagery seeking expression. He would then scrape out the images themselves from the bark, leaving lighter coloured slightly recessed figures. Using the point of a knife he would then cross-hatch body interiors. This birchbark scraping out technique was not widely used by Morrisseau, perhaps because it was not conducive to the fluid nature of his work, therefore treasures like this are rare. There were many more birchbarks rendered by Morrisseau using other mediums such as black china ink, pens, tempera, and later acrylics.

At Sandy Lake, Ontario, in the early 1960s, Norval spent considerable time with artist, Susan Ross, who had an ongoing interest in paint scraping techniques and etchings. It is possible that Morrisseau’s experiments with carving birchbark during this period were inspired by his companion’s artistic passions, and vice versa.

Though such etchings may at first glance appear simplistic there is symbolic insight revealed within the imagery. Taken together, symbols tell their stories. In ancestral times those in need would leave blank sheets of birchbark in front of a Shaman’s abode. The sheets would be filled in with medicine orientated to the particular needs of subjects when they returned.