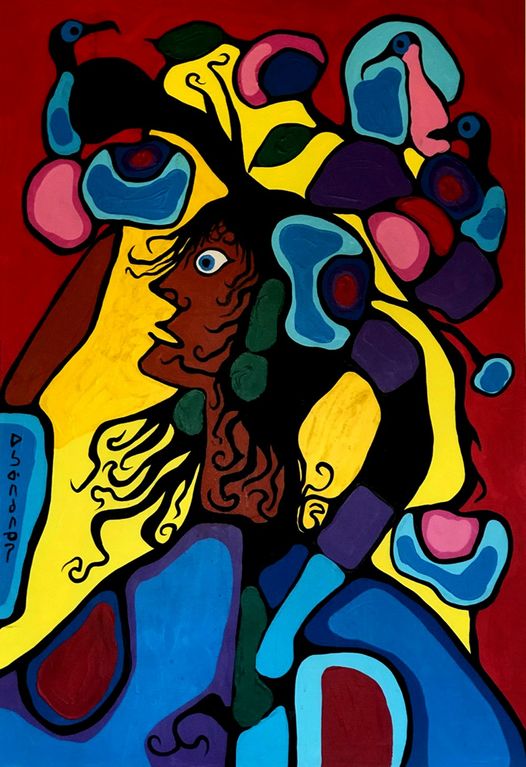 Night Shaman was painted by Norval Morrisseau while residing on Baldwin Street in Toronto, Ontario. Soon after painting this portrait Norval headlined the first contemporary Native art exhibition ever held in a major Canadian institution, “Norval Morrisseau and the Emergence of the Image Makers.” (Art Gallery of Ontario, February 1984)

Night Shaman is a self-portrait of Morrisseau immersed in memories of close friend, artist Carl “Sunshine” Henderson from Nova Scotia, who tragically passed away at 25. Carl was a significant artist in Morrisseau’s Thunderbird School of Art. In 1980 Carl journeyed to New York City on a hiatus and never returned. The circumstances of his passing were covered up by his family. His close friends, including Norval, were left wondering about his fate. Without closure Norval found himself compelled to seek answers within.

While this beautiful painting depicts Norval’s reminiscent thoughts and feelings about Carl, it simultaneously portrays various physical characteristics which are unique to Carl. In fact this painting is an iconic self-portrait of both beings, pictured within one being. We see a chiseled warrior reflecting upon the past, cloaked in illumination as he strains to seek out the truth. A pure white hue which emanates from the eye of this shaman reveals him in the act of self-healing.

In the years to follow Morrisseau produced many portraits of Sunshine; a sacred muse which he anointed “The Morning Star” and “The Aries”. in 2006 while attending the National Gallery exhibition with Norval he mentioned Carl to me, just as he often did, and still wondered if we would ever know.

This iconic artwork is a painting of hope, yearning, aspiration, appreciation and compassion. Love never dies.